Dead Neck Sampson’s Island (DNSI) is a barrier island south of Grand Island in Osterville that is co-owned and managed by BCWC and Mass Audubon. Years of erosion and longshore drift has resulted in sand from the eastern tip (Dead Neck) moving and collecting down at the western end (Sampson’s) of DNSI. Consequently, the Cotuit Cut has narrowed over time, slowing tidal flushing and impeding navigation. This erosion and deposition have also negatively altered the nesting habitat for threatened coastal shorebirds including Least Terns, Common Terns and Piping Plovers. To combat these issues, BCWC, Mass Audubon, and the Town of Barnstable have partnered on a three-phase dredging project at the western tip of DNSI. The material from the dredging operations will be used to create critical nesting habitat for the shorebirds and for beach nourishment. The hope is that these habitat enhancements will increase the number of shorebirds nesting on DNSI.

In addition, widening the Cotuit Cut will allow more dilution to occur in Cotuit Bay, which should improve water quality. Testing and monitoring over the next several years will provide us with important data. Navigation and safety will also improve through the Cotuit Cut.

Phase one began in November 2018 with the removal of approximately 130 feet of the western tip of DNSI. Five acres (5,000 cubic yards) of the dredge material was placed in the middle of DNSI to enhance nesting habitat for shorebirds. The remaining material (39,800 cubic yards) was deposited on the eastern end of DNSI for beach nourishment and bird habitat.

Fall 2019, phase two, saw the removal of an additional 130 feet at the western tip of DNSI. Again, some material was placed in the middle of the island for habitat enhancement with a larger amount added to the eastern end for habitat and beach nourishment. In phase three, which was completed by 2021, removed an additional 130+/- feet from the west end and “back passed” that material to the east end. 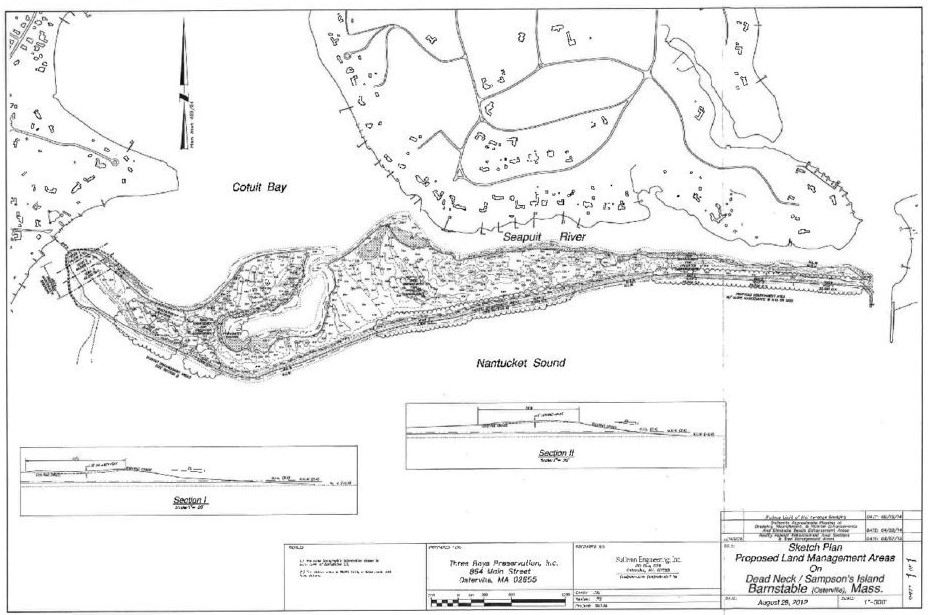