For three summers now, BCWC has grown oysters in an upweller demonstration project on Hyannis Harbor in partnership with the Massachusetts Oyster Project and the town of Barnstable. The tiny oyster spat are only 1-2mm (the size of a grain of sand) when first placed in buckets in the upweller. They filter phytoplankton (algae), nutrients and sediment from water pumped into the tank from the harbor – growing bigger and cleaning the water at the same time. Once the oysters reach 25mm (the size of a quarter), they are put in protective mesh bags and relocated to a suitable growing habitat in the Three Bays estuary. Here, the oysters will continue maturing and improving water quality in our local waters. Once they are big enough, approximately 3 inches, the oysters can be harvested by local recreational shellfishers. This year we are set to raise 120,000 oysters, which is the same as last year. In three years, we have grown almost 300,000 oysters!

This summer, we were lucky to have three amazing aquaculture interns caring for the oysters – Caroline Davock (a biology major at Smith College), Drew Kelly (an environmental science major at Lafayette College) and Jack McCann (a wildlife ecology major at University of Maine). BCWC would especially like to thank the Barnstable Association for Recreational Shellfishing (BARS) for their generous donation to help fund the operation of the upweller this year.

Our 2020 water stewards, Hannah Crawford (BS in zoology from Miami University of Ohio), Julia Fone (an economics/environmental studies major at Wesleyan University) and Emma Taccardi (PhD in marine biology from University of Maine), have spent their summer out on Dead Neck Sampson’s Island. On the island, the water stewards have been educating visitors and boaters about the barrier island’s ecology and wildlife. In addition, they have been busy monitoring six locations in Barnstable for invasive marine species and collecting water samples and associated water quality data throughout the Three Bays estuary. 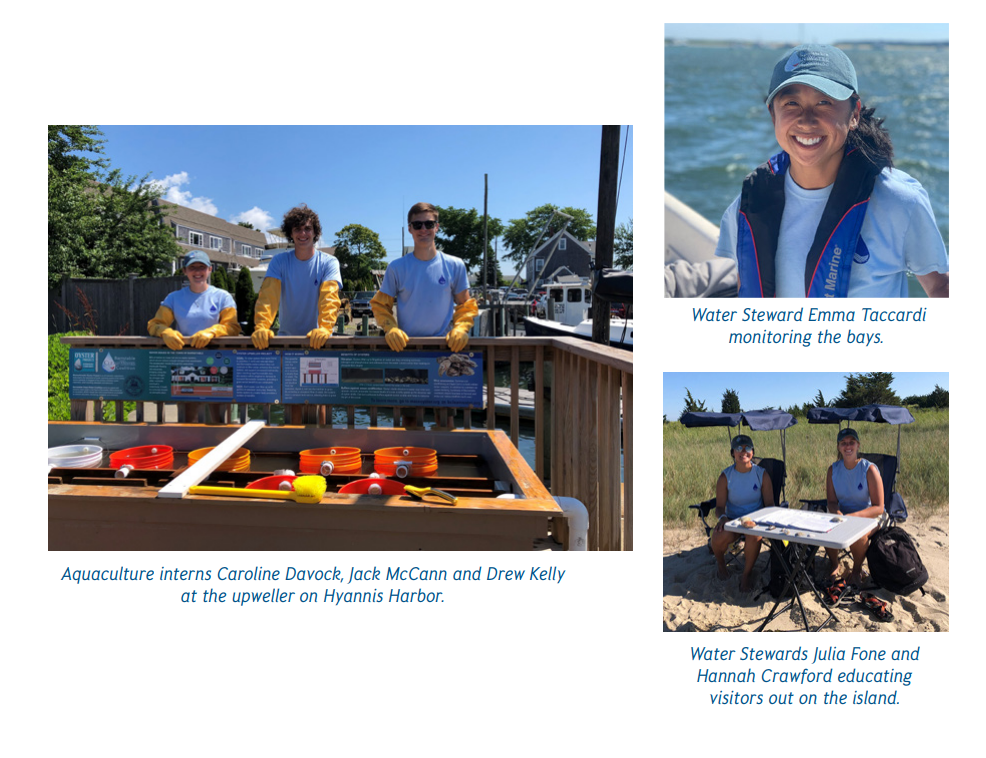