In our last post, we discussed the cause of our algal blooms and associated water quality problems here on the Cape (if you haven’t read it yet, go here!). Today we will be diving into their human and ecological impacts. In both freshwater and saltwater, the impacts are due to toxins being released into the water by bacteria, the blocking of the sun, and low dissolved oxygen levels. 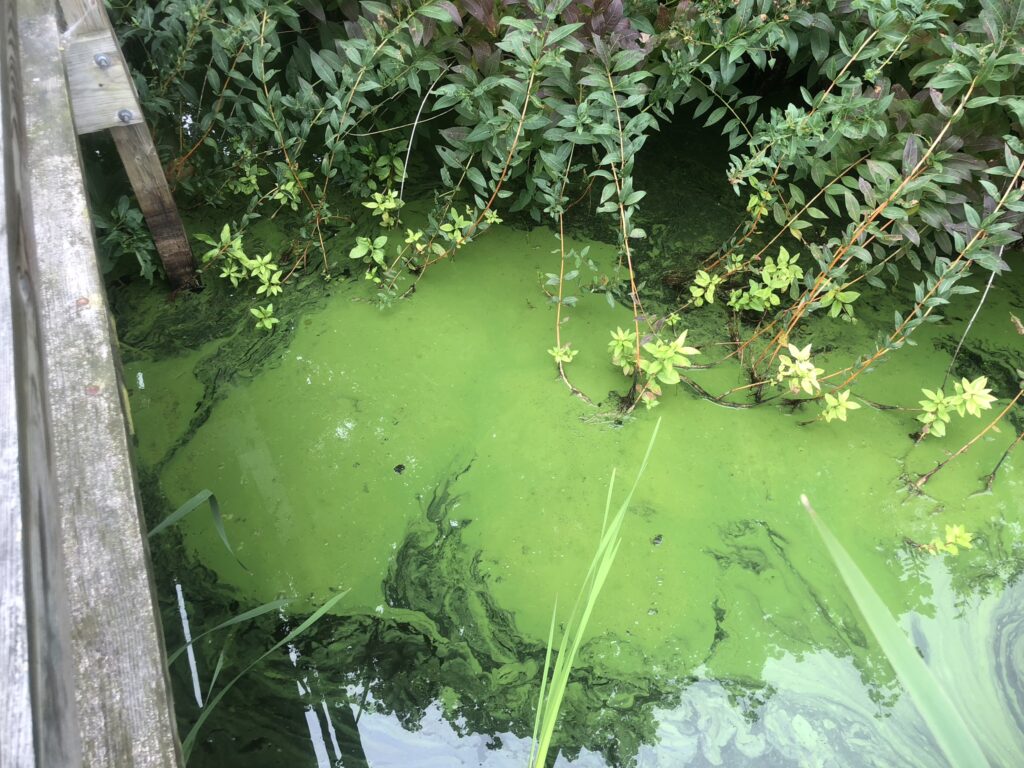 In fresh water, such as ponds, an excessive amount of nutrients can lead to blooms of cyanobacteria, a microscopic photosynthetic bacteria. Across the Cape during the summer months you may have seen pond closures as the result of cyanobacteria blooms. Cyanobacteria can release toxins that in high numbers can be harmful to people and animals. In humans, these toxins can cause skin and eye irritations upon contact and can lead to serious health complications if ingested. For dogs, it’s more concerning – it can be fatal. For these reasons, the Barnstable Health Department regularly tests all public ponds and posts alerts and closure notices when necessary. These closures have been occurring more and more often over the past few years. 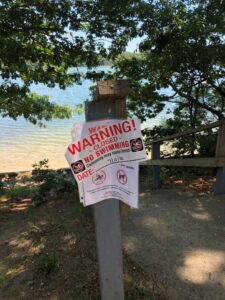 In saltwater, the two major types of blooms are known as rust tides and red tides. These blooms are caused by microscopic algae that can also release toxins. The toxin released by rust tides has no direct impact on human health. Instead, they damage the gill tissue of fish and shellfish. Consuming fish and shellfish impacted by a rust tide is not dangerous. However, it is important to note the same cannot be said for a red tide. Red tides release a toxin that is stored in the tissue of shellfish. Consuming those shellfish can cause paralytic shellfish poisoning. To know the difference between the two blooms, look at the color of the water – rust tides turn the water a brownish-red while red tides are very clearly red. These blooms are relatively rare at this point in time – it is a newsworthy event when they occur.

In addition to the blooms of microscopic algae, the region also faces large growths of macroscopic algae (seaweed) in our salt water bodies. For humans, the impact is aesthetic. Nobody wants to swim through a big patch of seaweed (dead man’s fingers). When it piles onshore, it looks and smells disgusting. Luckily, there are no human health impacts – touching an unexpected clump of dead man’s fingers can feel gross, but it won’t hurt you.

There are, however, ecological impacts that are the same regardless of the type of algal bloom (cyanobacteria, seaweed, rust tide, etc.). First, they block the sun from reaching the bottom. This is a serious problem for bottom dwelling plants that rely on photosynthesis to grow. Unfortunately, those plants also serve as an essential habitat for young fish. As a result, the loss of these plants impacts the entire food chain.

The other main ecologic impact of algal blooms is low dissolved oxygen levels. Under normal circumstances, there is an abundance of dissolved oxygen available for marine species to use to breath. However, when an algal bloom starts to die off, it becomes food for bacteria.. As the bacteria population helps to decompose the bloom, they use up most of the dissolved oxygen. This leaves little oxygen for other marine species. This has led to fish kills, lobster kills, and sea-sponge die offs.

Of course, these are the direct impacts of poor water quality. As if these weren’t bad enough, there are also rippling effects through the ecosystems and our economy. These impacts are all important and why Barnstable Clean Water Coalition is working so hard to mitigate these problems. 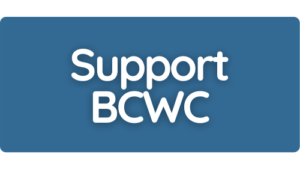 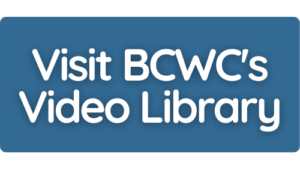 Previous StoryCoalition Quarterly – Issue 13 (Fall 2020)
Next StoryPFAS: What Are They and Why Do We Care?