In December 2019, BCWC, the EPA and TNC co-hosted the Marstons Mills Cranberry Bog Restoration Workshop. This workshop, attended by 47 scientists and regulators from the local, state, and national level, focused on identifying nature-based strategies to reduce the amount of nitrogen travelling through the cranberry bogs at the headwaters of the Marstons Mills River.

These cranberry bogs act as a collection system for water flowing from the thousands of residential septic systems surrounding the upper reaches of the Three Bays watershed. The bogs, the Marstons Mills River system and Mill Pond all offer a unique opportunity for the creation of a “natural treatment system”, which incorporates many of the same components that are found in our own municipal wastewater treatment system.

We are beginning to install nature-based strategies, known as bioreactors, in the bogs that will hopefully become part of a comprehensive ecosystem restoration plan. Each of these bioreactors is designed to remove nitrogen from the surface waters using wood chips, along with additives including biochar (charcoal used as a soil amendment for both carbon sequestration and soil health benefits) and alum (a chemical compound).

An impressive team of scientists is working on three separate bioreactor projects sited near each other in the bogs. One team is led by researchers from the University of Massachusetts Dartmouth School for Marine Science and Technology (SMAST) and another is led by researchers from Mount Holyoke College. The third group, led by our own BCWC team with assistance from the EPA and TNC, installed the first, woodchips-only bioreactor at the end of July. 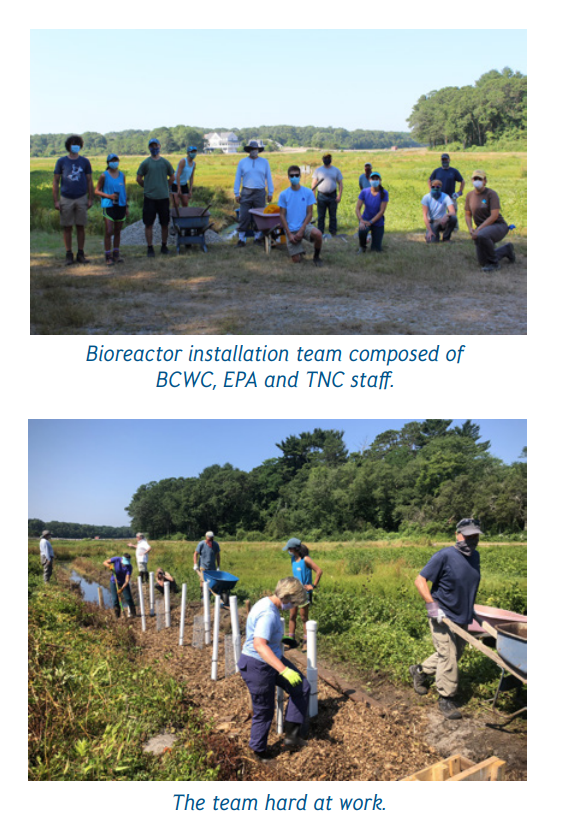 Check out our video on the Cranberry Bog Bioreactor Nitrogen Reduction Project.